It turns out I'm a snob too. But only a food snob. Because I hate shopping. And ingredients.

Every now and again I slap up a recipe and declare this to be a cooking blog. If it WERE a cooking blog, I would name it "The Reluctant Cook". Because I hate cooking. And laundry. And dishes. And especially shopping.

I love food though. And eating (and incomplete sentences).

Somehow I always convince myself that it will be easier to bake bread from scratch than to drive the extra ten minutes in the car. Same with the tortillas. They have them at the grocery store, but they're icky.

This week I tried to get a picture of an egret on a telephone wire, but the traffic light turned green and I had to go.

I tried to get a picture of a train car that said, "Do not hammer on train car" but the train was moving too fast.

Who are these people who would grab their hammers, hop out of their automobiles, duck under the railroad arms designed for their safety, approach a moving train and hammer on one or more of the cars?

I didn't get a picture, regardless, so I'm mostly just stuck with this one that I took in an elevator on our trip to Washington: 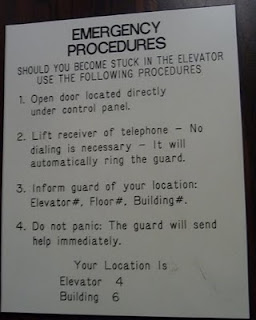 I think instruction #4 should really be instruction #1. Because if you've already read four instructions while trapped in an elevator, haven't you already made a concerted effort not to panic?

And also, I took a picture of a waffle. Though I can't remember why: 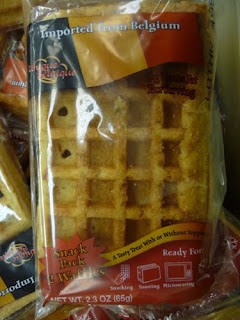 Could these things even be related to the waffles I make with butter and flour and egg, all delicate and crispy and steaming hot off the waffle iron?

I think I'll just stay a reluctant cook so I don't have to find out.

Happy Christmas to 33% of the world! I hope you're enjoying all kinds of Christmas baked goods that didn't come in plastic wrap!

My next post will probably be either late or picture free or both since I will be traveling.
at 12:10 PM 9 comments:

I enjoy new clothing and all, and there's nothing like realizing you've gotten someone the perfect gift, but it's A-OK with me if I never see another shopping mall for as long as I live.

Look: Going to the mall in the holiday traffic is so bad that people were changing their minds. Here they are exiting on the entrance ramp: 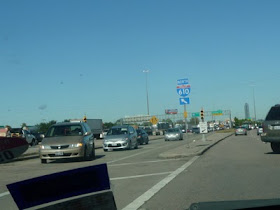 I saw this on the way to the mall too: 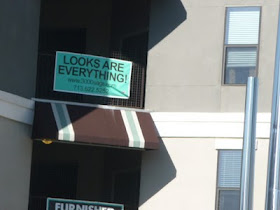 So THAT'S what's wrong with us!

Is this car missing a passenger? 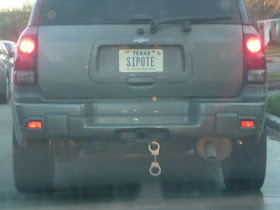 Here's Sugar saying the blessings over the Chanukah candles. Sugar almost bit Older Gal's face off several times as she worked to accomplish this feat of feline piousness. But Older Gal was relentless: 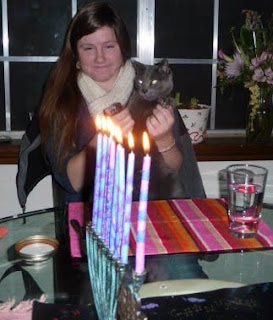 I've said this before about kids and I'll say it again: just when you think you can't possibly take one more cotton pickin' thing in your life, your kid gets lice.

It's like they're walking barometers - Woah! Life's a bit too intense right now! I better keep everyone home by catching some childhood ailment or pestilence!

This time it happened to be walking pneumonia instead of lice.

This is what I love about my sweet pea - she laughs with me about the fact that I get mad at her for having walking pneumonia.

And this is my advice to all you people who have kids too young to drive: run out an and get a stepdaughter this very instant! Seriously, older gal was not only willing to bring my pneumonia-ridden sweet pea to the doctor while I was at work, but she was HAPPY to do it!

So how did I end up mad at the gal for being sick? Like this: teenager wakes up unable to breath. Stays up all night watching a movie on her ipod. Then says, "I don't think I can go to school!"

"WHAT!?!?! You stayed up all night watching movies?!?!?! You are going to school let me tell you!!!" Luckily The-Guy-Who-Knows-A-Song-About-A-Chicken had mercy on her poor little pneumonia-ridden-soul and encouraged me to leave her home with older gal. We found out about the pneumonia the next day.

In my defense, although she was sick enough to stay up all night, she was NOT sick enough to ask me for medicine. I guess I'm just THAT unpleasant when I get woken up in the night.

Happy last night of Chanukah everyone and *H*A*P*P*Y* *B*I*R*T*H*D*A*Y* to my boy! I promise to have you a birthday party one of these...months. And to buy you a lunch kit. And to buy you a slice of pizza on Thursday. And whatever all else I've promised you during year 11!
at 7:14 AM 13 comments:

Forget the Teenageer. Forget Death by Chocolate. December is Going to Kill Me First.

Here's my annual post about how totally overwhelming the holidays are. I mean December is a nice idea, but who the heck wants to follow through?

For instance it's been over a week and I haven't even mentioned to the blogsville that it SNOWED IN HOUSTON! 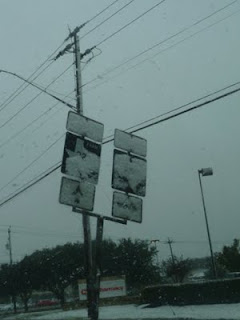 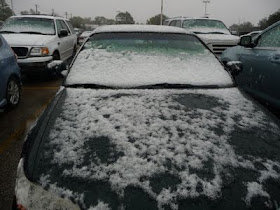 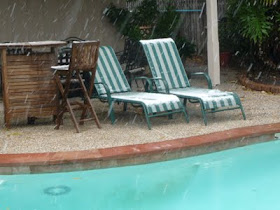 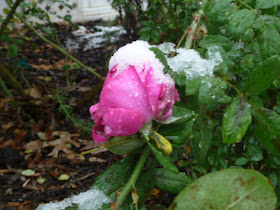 It not only snowed, but it snowed and FLOODED at the exact same time! I LOVE Houston! I didn't get the best picture, because I was driving, of course. But that white stuff on my windshield is snow and the cars around me are negotiating flood water. 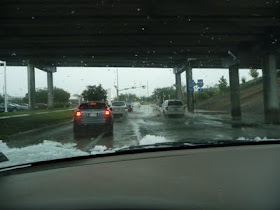 Even if the snow got deep enough, you can't really sled or ski or snowboard in Houston, because we don't even have hills, much less mountains. So my boy made due with his scooter: 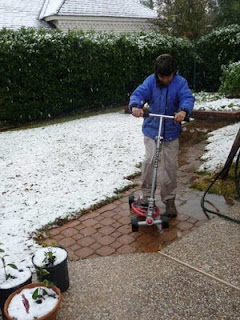 I'm not sure exactly why I continue to be so amused in the grocery store, but I am. Like so many other people, I've been waiting for YEARS for them to come out with a dish detergent that will make my plates smell like baby harp seals: 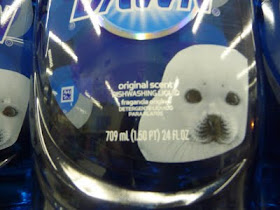 I realize this is par for the course these days: 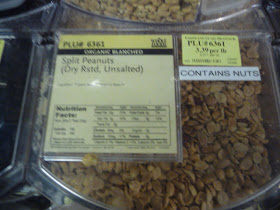 In fact, maybe by now it's less amusing and more just a generalized feeling of wonder: What are the repercussions of deciding collectively as a society that it's a good idea to allow ourselves to mentally check out ALL of the time? And what REAL dangers will go unheeded because we're accustomed to being warned about the ridiculous? And what will the pendulum look like when it swings the other way? And why does organic food have to be so cotton pickin' expensive?!?

Last picture for the week (ok, little over a week, but it's DECEMBER fer cryin' out loud and I don't handle the month of December well): 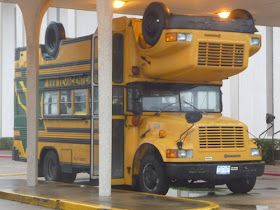 I saw this in the parking lot at work. I asked the head janitor about it, because he's generally in the know about the comings and goings of...everyone. But all he really offered me was that the bus did indeed have permission to park there.

It's Like Being Serenaded by a Group of Dying Chipmunks

We went up to Washington DC area for Thanksgiving and seriously, the elevators going down to the subway sound like very loud wounded animals. 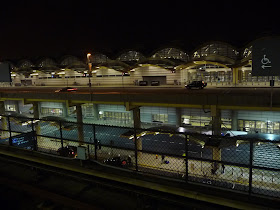 That's actually a different part of the subway, but I thought it was prettier than chipmunky sounding place.

So then we got back to Texas on Saturday, the temperature was still in the 70s, and the city had put up these cute little signs: 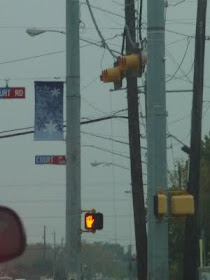 Religious school is less than two miles from here & we saw ALL these squirrels just on the way there & back: 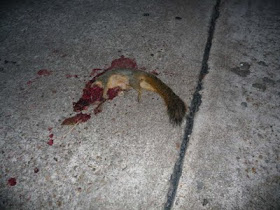 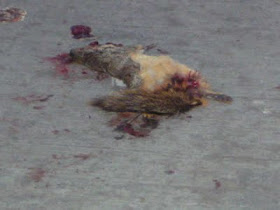 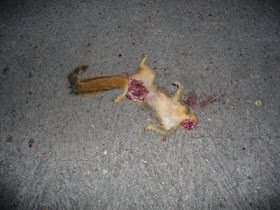 We saw more dead squirrels than that, but I figure you can probably only take so many pictures of gored squirrel guts before your neighbors start to wonder.

Actually, I posted this because The-Guy-Who-Knows-A-Song-About-A-Chicken has asked for a road kill post more than once. And what the heck kind of wife am I going to make him if I can't even post a few rodent innards as a favor to him?

Younger gal asked why there were so very many dead squirrels, and of course my first thought was that they were expressing their sympathy with the dying chipmunks of D.C. by committing mass suicide.

But then I thought maybe the mass suicide was due to them having been confused about the season when suddenly they realized (due to the signs) that they hadn't gathered enough acorns or something.

I was driving along wondering the exact number of roadkill pictures that constitute an adequate expression of undying love when a squirrel not so much darted but ROCKETED across the road, giving me an live (or narrowly-not-dead) demonstration.

If I had been driving just three miles an hour faster instead of meandering lost in thought about rodent carcass, he or she would have been squished flat to the pavement like the rest of them. Half the squirrels throughout the city must have been repeating his or her mistake at an absurd rate to produce this carnage.

Maybe it's the full moon. 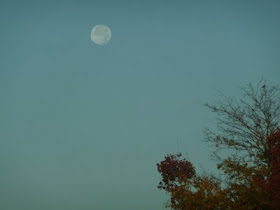