I keep trying to type in my real stalking story and my problem is this: being stalked takes a very long time and most of it is excruciatingly boring to everyone except the recipient of the stalking.

Basically this acquaintance, a racquetball buddy of my ex husband, called me from out of the blue to say he was separated and getting a divorce. He had moved into my apartment complex.

He really, really had to talk to me.

And the calls started getting more and more frequent and occurred at less and less socially acceptable times of day. 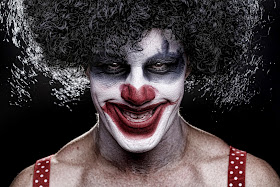 You know how when preschool teachers finally get a chance to talk to someone that's not four years old, they occasionally sit around and talk about male body parts? Well, apparently men do that too.

So it turns out that according to stalker guy that my boobs make up for a multitude of other sins. I think that was the gist of the conversation. I mean, the whole thing was sort of muffled since he was leaving the message unintentionally. But that's what I got out of it.

I felt extremely exposed during all of this, because my old apartment complex had a public walkway that went right past my bedroom window. So when he called the next time at 3:00 AM, I called my brother and burst into tears.

No matter how much of a hard time my parents and I may give my brother for being impossible to reach by telephone, he has always been there each and every time I've called at three in the morning. So a word to the wise: if you're having trouble reaching your brother, try three am. But do so judiciously because otherwise your sister in law will (rightfully) hate your guts for life.


My brother listens and advises me to call the police. "But what do I tell them?" "Tell them you're a woman at home alone with her child and you're terrified because this guy won't stop calling."

"Oh!!! I'm terrified!" I replied to him incredulously.


No wonder I had burst into tears.

My brother assured me that the police certainly would have had weirder calls that night and that if they didn't feel it was worthy of their time, they would tell me so.

The police come and stalker guy calls during their visit. They tell me that if I feel comfortable, I should answer and tell him to stop calling. I decide to wait until "morning" (which I considered 5:00 AM to be, although it was still dark) because talking to stalker-guy-who-lived-in-my-apartment-building-and-had-easy-access-to-my-bedroom-window seemed way too scary to do at night.

And I thankfully never heard from him again, except my boy was in the same homeroom as his kid last year. And the moral of my story is that you can be all kinds of careful on blogs and Facebook and all OVER the internet and STILL pick up a random stalker from real life. But at least he won't have your email address.

I hate to say that was the SHORT version, but it really was. And it's still too long for me to even post pictures of my newly green living room or funny bumper stickers I saw last week. But that's about as short as I can seem to manage, folks. It was a LOT longer in real life. 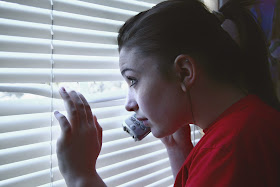 (Photos from Dollar Photo Club. Which no longer exists actually.)
at 8:45 AM