I Drove to Manvel Last Weekend to Get Leprosy 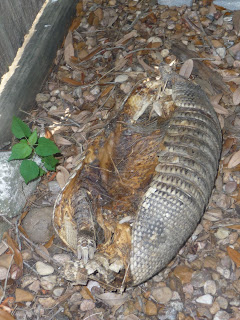 And I would explain WHY I was driving to Manvel to get a dead armadillo, but I'm not exactly sure I understand it myself. Shortly afterward older gal found out that dead armadillos are known to carry leprosy so we banished him (or her) to the back of the yard near the compost heap.

The kids got off to camp just fine, presumably without bringing any swine flu OR leprosy with them. Well, they at least didn't bring swine flu contamination to camp, because they took the temperature of every last person driving in before anyone was allowed in the camp gates. And so that meant all five of us. And about five hundred million other people.

On the whole, though, I was greatly relieved that they were so proactive in preventing flu. But not so relieved that when I pore over camp pictures each and every morning I don't automatically assume that my gal's in the infirmary with swine flu if I don't happen to at least see a picture of the side of her head.

Older Gal found a greeting card in her collection that she wants to send one of the kids while they're at camp with a picture very similar to this on it: 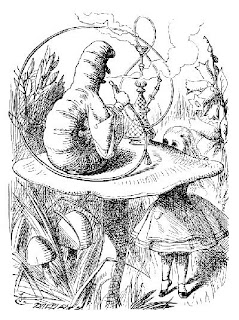 Worried that she might be promoting smoking or drugs, she pointed out the caterpillar's hookah. She was relieved when I told her that the caterpillar was from Alice and Wonderland, that it's considered an acceptable drug reference for young, American minds. However lest you think she grew up un-Disneyfied, I want to point out that I was seriously surprised. I've never, ever seen Older Gal miss a cultural reference, pop or otherwise.

Last but not least, Older Gal did re-comment to all who posted on her guest post! So now she is no longer twins with The Blogess, no matter how much fun being a Blogess twin would be. She will henceforth have to contain herself to attempting to sneak illegal chocolate wafers to my gal and boy at camp, sending them greeting cards depicting socially acceptable drug references, and supplying me with dead armadillos.
at 6:03 AM