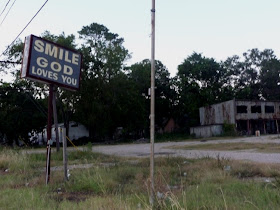 I took this picture because I liked how the optimism of this sign contrasted with the total devastation of the neighborhood. I couldn't quite capture it adequately, but I did get hit on by two different guys while I was taking the picture.

One asked if I would take his picture, and when I didn't take him up that, he asked if I wanted to go home in his truck. The other guy merely called out something unintelligible and blew kisses from the window of his car.

So of course I told The-Guy-Who-Knows-A-Song-About-A-Chicken that I was coming back to that neighborhood for an ego boost if he ever dumped me for a younger woman. But he said that was never going to happen and that he can barely keep up with me as it is. So acting immature for one's age has an upside, apparently.

At least now I recognize being hit on for what it is. When I very first got divorced this guy was talking to me during a religious program and I was all, "Why is this guy TALKING to me?!?! Doesn't he know we can't hear the program?!?!?!?" And I was literally handing him my phone number before I realized what had happened.

I still beat out my blogging friend Ms. Q, who says she was actually on a date with a guy before she realized what had happened. And even then it was only because he told her. During the date.

Older Gal says she doesn't recognize being hit on at all. And I know this to be true, because awhile back we were at the sushi counter and the kid preparing the sushi was asking HER all kinds of questions about roe.

It's not like I'm any kind of expert or anything. But I'm thinking that if a guy who prepares sushi for a living and has the option of tasting roe day in and day out is asking a customer all kinds of questions about roe, he's probably interested in...well...something besides roe.

Right. So what was the point of this post? Oh yeah - God loves you, even if you live in a crappy neighborhood. And if a guy is asking you all kinds of questions about things that he should know the answer to or is trying to get you into his truck, then he's probably hitting on you. Or wants to kidnap and murder you. One or the other.
at 7:24 AM