In Which Older Gal Gives Us the Goods on the Vibrating Boobs... 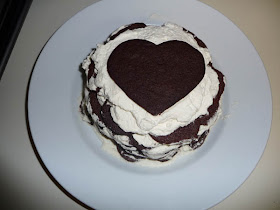 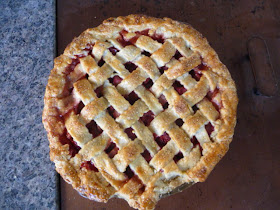 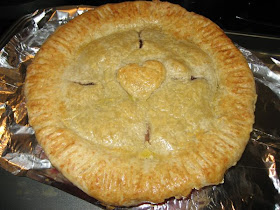 I know you’ve been waiting with bated breath for the vibrating boobs inside information, but first we need to step into the department of backstory. This is the quick cliff notes version, i.e. excerpts of the paper I wrote about insulin last semester (yes, I really stretched myself academically there). If anyone needs to see the bibliography, I’ll get it to you.


Insulin was discovered and implemented by Canadians Fredrick Banting and Charles Best in 1921 at the University of Toronto. They used a pancreatic extract from a dog, which they then injected into another dog that had diabetic symptoms due to the removal of it’s pancreas. They found that the diabetic canine’s blood glucose level decreased after the shot of insulin, the result they were looking for… In 1955, the structure of insulin was determined by Frederick Sanger, who was awarded the 1958 Nobel Prize in chemistry for those findings. As a relatively recent discovery, insulin has been at the center of science by being a drug new modes of preparation were tested on, and by being used as a treatment for a previously fatal disease…Insulin is primarily used in the treatment of high blood sugar that is caused by diabetes. Insulin dependent diabetes is an autoimmune disease of the pancreas that results in a cessation of insulin production in the body. Although diabetes had been given it’s full name, diabetes mellitus, by the ancient Egyptians, confirming that the disease was known of by that time, no treatment existed until the Banting and Best experiment in 1921. Before 1921, the only treatment, if it could even be called that, was keeping the diabetic patient on a near-starvation diet to prevent the damaging spikes in glucose levels due to carbohydrates from eaten food. The disease was always fatal, and people who had it were assured a short lifespan. Now, insulin can be injected in amounts that compensate for the intake of carbohydrates at meals…After this breakthrough success, insulin was prepared by extracting and purifying pancreatic tissue from cows and pigs, due to the similarity of structures between the bovine, porcine and human insulin, and manufactured as a drug for people with diabetes. This mode of preparation continued until 1982, when recombinant DNA technology came into science. In the early 1980’s, there had been discussions about the possibility of a shortage of insulin; it was projected that in 20 years, which was then about 2000, the supplies of insulin in the United States would be depleted…Using recombinant DNA to produce insulin allows the insulin to be molecularly exact, and also to be produced in large quantities. With the advent of recombinant DNA technology, insulin production became easier to produce in mass quantities, and cheaper…From the beginning, insulin was given by way of an injection; however, recently, the insulin pump was developed, which delivers insulin though a semi-permanent tube placed into the body.

My genetics professor said in class one day that “diabetes is a real drag,” or something to that effect. I’m not jumping for joy that I have diabetes, but I am thankful that I have this disease right now, in this day in age.

Now, before winter 2008 I was taking injections, or shots, of insulin multiple times of day to keep my diabetes under control. That really sucked, not just because of the number of times per day I stuck myself with a needle to try to maintain a decent average, but also because I had to use pen style injectors, although better than having to draw up insulin from a vial, but they were just weird. I also had to use two types of insulin, both a long acting insulin (Lantus, which has just been linked to the rate of growth of cancer, yay) and a short acting insulin (Humalog), the former to release slowly over the course of twenty-four hours, and the latter to be taken at meals to account for the carbohydrates consumed, and also to compensate for a high blood sugar. Then I got an insulin pump, a machine that automatically releases a preset amount of insulin over time (called a basal) and also calculates how much insulin you should take if your blood sugar is high, and calculates how much insulin you should take at meals based on your blood sugar and carbs eaten (those last two are referred to as boluses; I remember that because their kind of like bonuses), and I didn’t have to take shots anymore which was quite nice. If you ever ask a diabetic person if it hurts, they’ll most likely say no, they’ve gotten used to it, but that’s a lie. It does hurt, in the back of our minds, but we go through the motions on autopilot because we must, to survive. It does hurt, but I say that it doesn’t to make people feel better, or else they get this look on their faces, a mixture of pity, relief and revulsion. I’ve been taking shots as long as I can remember; in fact, one of the first lucid memories after coming home from the hospital was practicing how to give myself shots on an orange in the kitchen. Poor orange. But one time, a few months ago, I had to go back to injections for a few days because I forgot to order supplies for my pump when I should have…anyways, going back to shots multiple times a day was irritating, to say the least. It was like that one episode of The Unit in the Chinese casino with Cool Breeze (staying away from spoilers here). I promise we’ll be getting to the hilarious part soon. It’s just so hard to do manually what your body should be doing automatically.

Ok, on to the insulin pump. With regard to the previous paragraph, I’m not saying that I don’t have to poke myself with a needle at all, it’s just that I only have to do it about every two to three days in order to get the cannula, the tube that is in my body to complete the insulin infusion, replaced with a new one. It uses a nice big needle too, 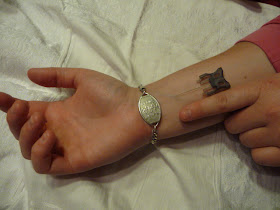 not one of the small, thin ones 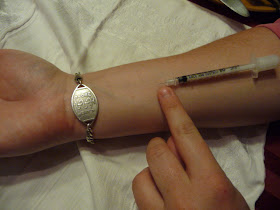 that I had to use with the insulin pens. I bet some of you are wincing at that thought, but really, one big needle every three days, versus 21 injections of irritating small needles, if you average it out to 7 injections per day? Sometimes in some of my pissed off moments, especially when a non-diabetic who’s not my doctor or a person in the medical field tries to tell me what to do, (sidebar here: never, ever say to a diabetic, “Are you supposed to be eating that?” Ponder that for a minute.), I want them to try to do what we do every day, for say, a week. I dare you.

Back to the insulin pump. It’s super smart, awesome, and tiny. 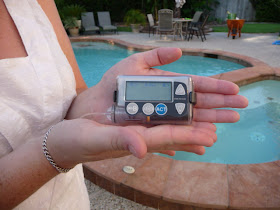 Inside the pump along with the computer stuff and wiring is a small reservoir that holds the insulin. A tube is attached to the reservoir, which is then attached at the other end at the infusion site, which is where the cannula is. 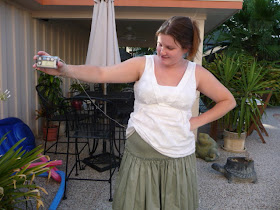 At this place, the tube can be detached and reattached as needed, for a shower, swimming, or other stuff. Although pumps are waterproof, I kinda don’t want to mess with a $6000 dollar machine.

On to what you all have been waiting for. I usually use the little clip that came with the pump to put it on my pants, mostly in the front pocket, or outside on the belt, with the tube inside the pant leg. People mistake it for a pager all the time, I’ve heard, especially when people use some of the other clips sold, such as the leather, professional looking ones. So, mostly I wear pants, jeans, or shorts, where the pump can easily be put into the pocket. 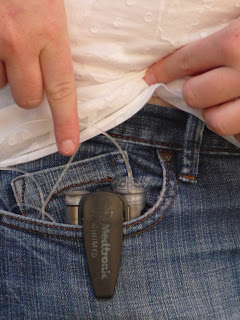 The tube is usually tucked in more, it’s out for educational purposes. 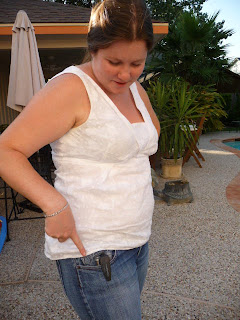 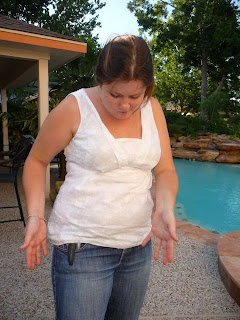 But now that it’s my first summer with the pump, I’ve had to get creative. This is where the vibrating boobs come in. I was wearing my second-favorite skirt, with a nice top. I didn’t want to put the pump on the band of the skirt, it would ruin the line of my body. 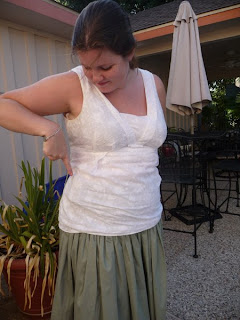 So, I clipped it onto my bra. 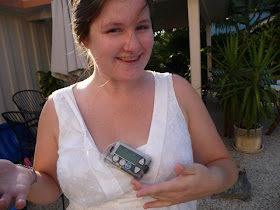 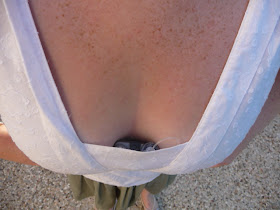 I’m endowed enough that I am able to do that without the pump sticking out. Yay . I just have to be careful that the tube doesn’t pop out. 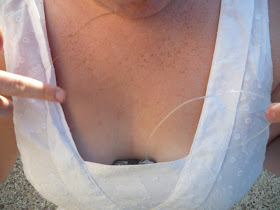 Now, there’s a choice of alarms you can pick when the pump wants you to know something. I always have it on vibrate, because the beeping options were not good i.e. a bad sound and distracting if I was with a customer at my hypothetical job. The pump has alarms for various reasons: the insulin you’ve taken for a meal or a high blood sugar has finished, you forgot to take your pump out of the suspend mode if it was taken off and you didn’t want to waste insulin letting it drip, or, if you were running out of insulin.

One day, I was sitting at the kitchen table, doing something, when my pump vibrated unexpectedly, as the reservoir had reached the point where it told me that it would need to be changed out for a full one. I did not expect that to happen; when I have to run to the bathroom to take insulin at a dinner, I know the vibration will happen momentarily when it has finished giving me the set amount, but this was totally out of the blue. It was…interesting. And so, doing what I do, which is sharing too much information because the filter from my brain to my mouth is out of order, I said “my boobs just vibrated.” Jill started snickering, and the next thing I knew, it was on this blog. So, I thought I might as well do a guest post, to explain it thoroughly. I do apologize for the meta up there, but it’s important, and Jill gave me the chance here to talk about it.
So if you ever hear a buzzing noise emanating from a woman’s upper torso, and a slight shiver, it may be from an unexpected alarm coming from the pump of a person with diabetes.

The other day, however, I was in a conundrum. I was wearing a dress that looked better without a bra, and I still couldn’t clip it onto my underwear. I had a fleeting idea that I could put it on my shoe, but that fell out of favor rather quickly. Any suggestions?
at 9:09 PM